Fascial Distortion as Sources of Symptoms throughout the Body

Why does fascial distortion necessarily cause pain? For example, your fascia could have a twist, tear, separation, adhesion, or some other sort of distortion from normal. This can definitely cause you to experience pain, but only if the signals from specific types of neurons/nerves are registered by the brain.

However, the aim of this post is not to cover the very involved process outlined above. Nor is it to explain the mechanisms of pain generation in the body. I hope to make the point that for a change in the myofascia to cause pain in the same area of the body where the distortion exists, it must directly or indirectly result in these pain signals being sent to the brain.

So how does this happen? I’ve provided you with a few concrete examples below. Scroll down to get all the details. …

Dealing with Pain or Injury in the Greater Austin Area?

Let’s say you strain your hamstring at the gym or on a run. Depending on the specifics of the trauma, it is theorized by some that a number of changes in the myofasica could have occurred. One such change could be a twisted fascial band that was formerly a flat sheath of fascia (or at least part of the sheath is twisted). How does a strong longitudinal-force through the muscle cause these distortions to occur? That’s a great question. I could go on with more theory, but the truth is that I’ve never hooked up a camera inside the hamstring and recorded the traumatic event. Such real-time documentation is impossible for obvious reasons, though there is plenty of post-traumatic ultrasound imaging that shows soft tissue changes with injury. What I can say is that these fascial changes can be palpated, and when they are treated with specific manual techniques to reverse the aforementioned ‘twists,’ the results are undeniable.

If you’re suffering with pain and would like to find out why, click here to request a completely free consultation with an expert physical therapist.

Returning to our original question, it is important to know that tiny nerve endings and blood vessels exist pretty much everywhere in the body. Fascia is lined with, and pierced by them. Imagine twisting a towel that was lined and pierced with these tiny nerve endings. At a certain point, the twisted towel would become tight enough that it was compressing the nerves. This illustrates, in a very simple manner, one way that fascial distortions can have an effect on the nerves in the area, causing pain and dysfunction.

Fascial distortion as the cause of symptoms elsewhere in the body

So now that we have a better idea of how fascial distortions can cause pain in the same area, I’d like to explore an example of how they can lead to pain elsewhere in the body. The patient I am about to describe is actually quite common, though I often see patients like him after unsuccessful visits to multiple practitioners. Why? Because the underlying cause of his pain was not in the area he was experiencing symptoms.

Fascial distortion in a runner

‘Mr Smith’ was an avid runner. One year before I met him, he had strained his right lower back lifting a heavy box. But the discomfort from that injury had faded within a couple months. Since the symptoms were getting progressively better, he decided he wouldn’t get it checked by a healthcare practitioner.

Once his pain was gone, he resumed his daily run and progressed back to five miles per day. After 2-3 months, he began to notice a mild pain in his right knee after his morning jogs. It wasn’t long before this pain was present during his runs as well. Within a few weeks, he could no longer run.

His orthopedic specialist referred him to physical therapy with a diagnosis of Patellar Tendonitis. After a few treatments, Mr. Smith’s symptoms began to improve, and he started some light jogging. Two months, many physical therapy treatments, and a cortisone injection later; Mr. Smith was still unable to progress beyond a two-mile jog without pain. The ultrasound, leg/hip stretching and strengthening, and massage of the painful area had all helped. But the problem remained.

The real source of the problem

When I saw Mr. Smith the first time and watched the way he stood, walked, and ran; I noticed a very slight lean/shift of his trunk to the right. This prompted me to ask about his back and any injuries/pain he may have had in the past. By the end of the evaluation—and after ruling out a few other factors such as leg-length differences—it was clear his tendon irritation was from repeatedly overloading his right leg.

This overload was due to the fact that the injured myofascia in the low back had remained tight. Even though the pain faded over time, it caused him to shift his weight slightly to the right. The overuse manifested as an irritation of the patellar tendon, though it actually could have come up as pain in a variety of other areas.

The Orthopedist was correct. Mr. Smith did have inflammation and irritation of his patellar tendon. Treatment of this area was effective to a point, but it was not addressing the underlying cause of the overuse. A few Manual Physical Therapy treatments to release the myofascia in his right lower back, and Mr. Smith was back to running 5 miles pain-free.

The importance of finding the underlying cause of pain

The moral of the story is that even if an injury ‘fades’ quickly, it does not mean that it didn’t leave behind a problem. Though the true source of musculoskeletal pain may often be in the same place symptoms are experienced, it is also quite common for it to exist in a different part of the body.

← Previous: What is Fascia? Next: Is Sitting Lethal? How To Keep A Desk Job From Literally Shaving Years Off Your Life → 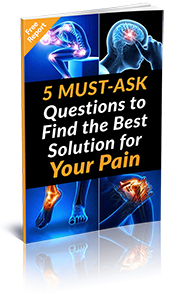